Anastasia Traynin was one of the participants to the April 3rd Peace Tour which was held on 12-13 May. She wrote a review after the tour. Thank you very much for your contribution! :) This article was published at Gwangju News : http://gwangjunewsgic.com/community/community-leaders/jeju-dark-tours/

Living in Gwangju, walking down Geumnam-ro, and around the blue fountain, clock tower, and the former Jeollanam-do Provincial Office, it is hard to miss the various commemorations of the May 18 Democratic Uprising. The truth of that 1980 national tragedy and spark for democratization was hardly known outside of activist circles before the 1990s, and the full story continues to be uncovered to this day. Yet the 5.18 incident is not the first case of the Korean government committing atrocities against its own citizens and covering it up for years.
Well known for its beautiful beaches, plentiful citrus fruits, and surging tourism, the southern island of Jeju holds a dark and often forgotten history. When I first visited in summer 2012, I brought my bike on the ferry and cycled down to Gangjeong Village in Seogwipo, the site of a prolonged struggle against the now-completed and operational joint civilian and military Korean naval base. At the time, I only heard a brief mention of the history of violence that predated the events in Gangjeong. On subsequent visits, I learned more about the connections between the naval base, Jeju as an Island of Peace, and mass grave sites and memorials that could be found in nearly every village on the island. 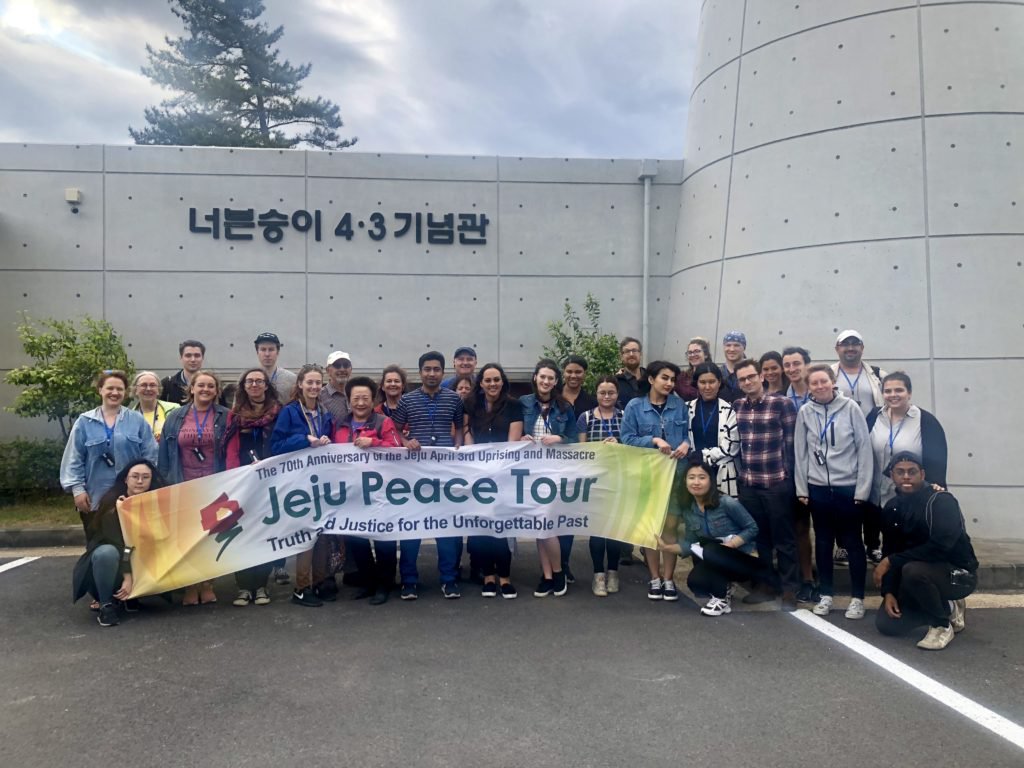 The tour group in front of the Bukchon April 3rd Memorial Hall.

As the year 2018 marks the 70th anniversary of Jeju’s April 3rd Uprising and Massacre, an education campaign has been mounted nationwide, including President Moon Jae-in’s attendance at the 4.3 Memorial on Jeju, complete with a formal apology for violence committed by the state. Along with this, a local non-governmental organization (NGO) called Jeju Dark Tours: The Unforgettable Past has opened to give a glimpse into these tragic and buried events. With experience in Southeast Asia and at the large Seoul-based NGO coalition People’s Solidary for Participatory Democracy, human rights activist Baek Gayoon moved down to Jeju Island in November 2017 to co-found her Dark Tours project. With her command of Korean and English, she is able to give separate tours for Koreans and interpreted tours for foreigners, including special programs for activists coming from abroad.

Along with a group of seventeen other international participants, mostly English teachers on Jeju, I went on the first general weekend tour on May 12–13. As a non-Jeju native, the amount of love and solidarity that Baek poured into sharing the local history was a true testament to her activist spirit, which she passed on to all of us. After meeting at Jeju Airport on Saturday morning, we boarded our tour bus and rode to the first important stop: lunch. Sharing Jeju-style bibimbap with lovely soup and side dishes was a safe space in which to start the relationships that would build between many of the participants during the weekend. 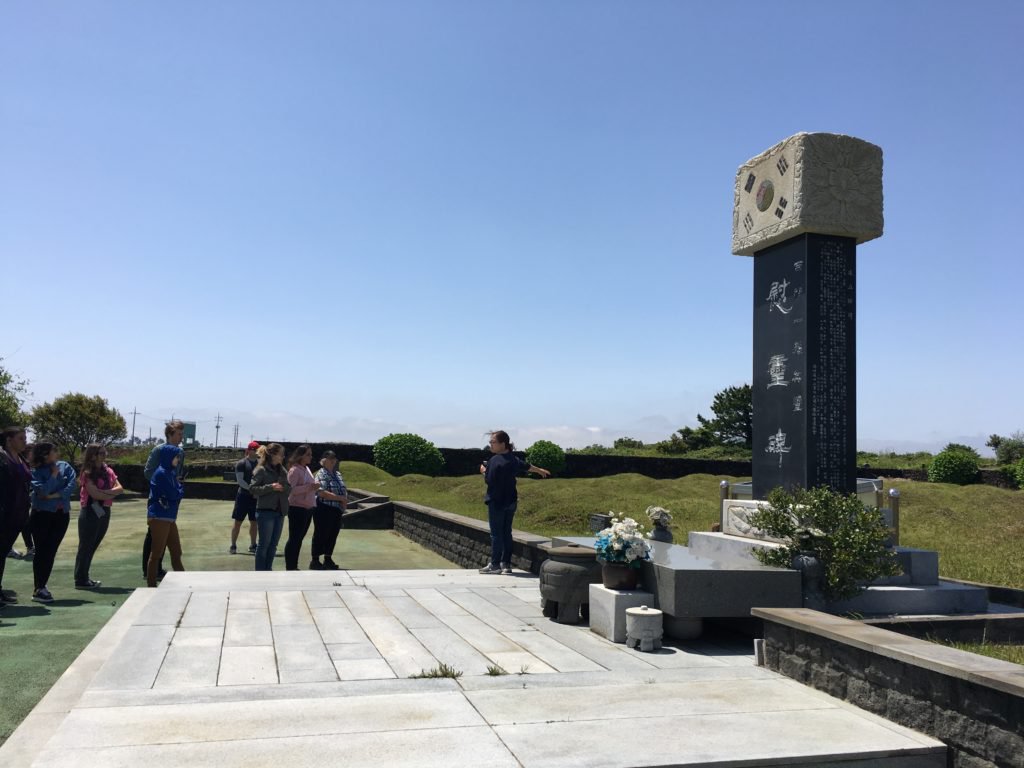 The next stop was Jeju 4.3 Peace Park with its museum, memorial altar, and symbolic mass graves. It was my third visit to this site further inland towards Halla Mountain, with its windswept open space that was chosen for a rare absence of actual graves. As usual, it projected an eerie and barren mood, but Baek’s excellent walkthrough of the museum exhibit put me right back into those early post-colonial days. The Jeju Uprising officially began in 1948, three years after liberation from Japan. Between then and the following six years, an estimated thirty thousand Jeju citizens (10% of the population) were killed under suspicion of being “reds” during a militant national anti-communist campaign. Before the social movement of the late 1970s and the 1980s shed some light on the massacre, the people of Jeju could not openly speak about the tragedy and trauma that had befallen their home. Generations lived and died without public acknowledgement of their profound loss. Finally, former President Kim Dae-jung signed the 4.3 Special Law in 2000, creating the National Committee for Investigation of the Truth about the Jeju 4.3 Events. President Moon’s recent apology was preceded by that of former President Roh Moo-hyun in 2003, but there was still more to be uncovered. 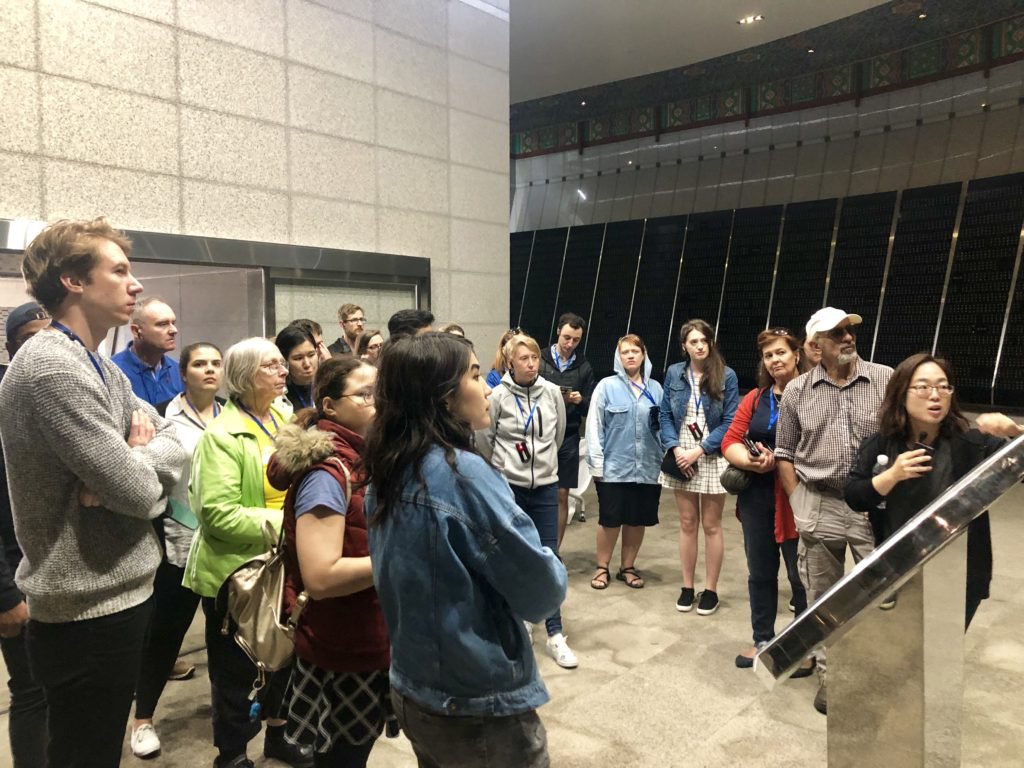 Baek Gayoon explaining about the events at the 43 Peace Museum.

Volcanic Jeju Island is also known for its caves, many of them literally deep holes in the ground. Jeju native O Muel’s 2012 feature movie Jiseul (Jeju dialect for “potato”) depicts targeted villagers living for months in one of these natural hiding spots. Our third stop on the Dark Tour was a walk through the forest to stand above the well-known Seonheul Doteul Cave, where we could imagine how the terrified islanders spent their last days before being discovered and shot. Our last Saturday stop before dinner was at Bukcheon Village, considered the first spark of the Jeju Uprising, where we heard from a primary source: Go Wan-soon, the chairperson of the Senior Villagers Association who witnessed the massacre at age nine. Passing through tears of traumatic memories, Go also revealed her delight at the chance to meet President Moon at the memorial on April 3. For many tour participants, hearing Go’s story was one of the most poignant parts of the weekend.

After a heavy, stormy night and much-needed decompression and reflection following Saturday’s tour, we were fortunate to experience a sunny Sunday on Jeju. The stops were no less deep and historical: a walk around the Imperial Japanese anti-aircraft emplacement Soedal Oreum, a mass graveyard of 100 ancestors, and the house of the famous “lady without a chin” – 4.3 survivor Jin Ah-young who lived in the tiny building until her death in 2004.

By the time we parted with Baek and the others, it was difficult to return to the normal weekly routine, having gone back seventy years in time in such a beautiful but haunted setting. With the next general tour for international residents coming up September 15–16, the Jeju Dark Tours is sure to instill more of a reverence for the past that leads to an understanding of the present and future. 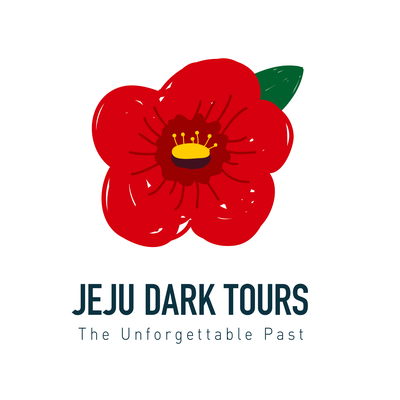 Anastasia Traynin (Ana) was the 2014–2015 online editor for Gwangju News and recently left her role as co-managing editor during her time as GIC coordinator. She is pursuing a master’s degree in Korean studies in Seoul. Her interests include social movements, alternative education, feminism, and the environment.